Pennsylvania Highlands Community College is excited to announce the hiring of Chris Farrell to lead the College’s Blair Center as its new Director. 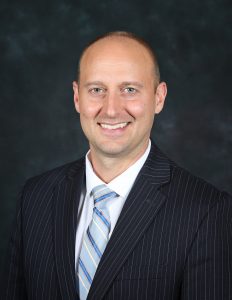 Chris Farrell joins Pennsylvania Highlands Community College after serving as the Senior Director of Admissions and Enrollment at The Art Institute of Virginia Beach for the past six years. Overall, he successfully led teams at nine different colleges over the course of 14 years.

During his tenure at The Art Institute of Virginia Beach, he helped to build positive relations between The Art Institute and its immediate and surrounding communities by delivering meaningful programs, offering creative events open to the community, partnering with local businesses and government agencies, and developing a culture focused on student success.

Mr. Farrell has earned an MBA in Business Administration from Argosy University, as well as a BSBA in Management, Accounting, Finance, and International Business from Ashland University. Additionally, he was selected to speak at The World Expo in Aichi, Japan in 2005 regarding “Harmonious Coexistence” between different cultures, industries, and how we fit with our planet to move forward collectively in a positive way.

Chris Farrell is eager to start leading the College’s Blair Center, which recently underwent a modern expansion that includes an additional five classrooms, one science lab, one computer lab, a student services area, and several comfortable areas for lounging or individual study.

“I really look forward to being a part of this college and community. This is an exciting adventure full of opportunity, and being at a college with extremely competitive and affordable programs in an area as beautiful as Blair County makes it even better,” stated Chris Farrell, Blair Center Director. “I’m very happy to be part of such a positive culture. If you don’t know us yet, I encourage you to come see for yourself.”

Pennsylvania Highlands has six locations throughout the Southern Alleghenies region that serve residents of western Pennsylvania.