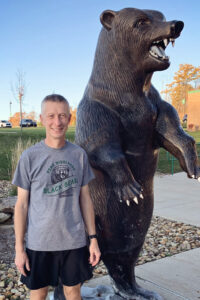 Jeff Dick, of Mineral Point, has been named the Head Coach of Men’s and Women’s Cross Country at Pennsylvania Highlands Community College.

Mr. Dick will be responsible for the organization and direction of the College’s NJCAA, Division III Men’s and Women’s Cross Country program. For the past six years, Jeff has been the Assistant Cross Country Coach at Central Cambria High School where he specialized in new runner development and training schedules. During his time at Central Cambria, his boys team won six LHAC Titles and six District 6 AA titles. His girls team won five LHAC Titles, five District 6 AA titles, and a state championship in 2018.

“We are thrilled to have Jeff lead our young program,” stated Sue Brugh, Director of Student Activities and Athletics. “We are eager for him to recruit runners who will be able to thrive as a Black Bear and beyond while building our program supporting the mission of the NJCAA.”