Written in the key of G with accompanying guitar chords, Pennsylvania Highlands Community College now has an updated alma mater: 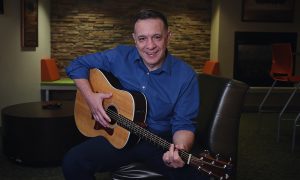 Nestled in the Allegheny Highlands is our home.
Integrity and excellence, these values here are grown.
Education, our foundation, answering the call.
Service to communities, opportunity for all!
Fellow scholars, new found friends, we Black Bears roar and sing.
Gathered here in harmony and echoed from the peak –
Penn Highlands, hail to thee!

Gary Boast, Assistant Vice President of Institutional Research and Assessment, has been named the winner of the Penn Highlands Alma Mater Competition as a part of the College’s 25th anniversary celebration.

Boast, along with his son Matthew (York, PA) and family friend David Burns (Philadelphia, PA), wanted to pen a piece that reflected the passion and focus of the students and staff at Penn Highlands.

“I originally compiled a list of words that were basically what I would experience in meetings or in reading about the Penn Highlands experience,” Boast said. “We arranged them into lyrics as a group, hoping that they would be an updated take on the original Alma Mater.”

The group spent one weekend laying out the first iteration of the piece, and they reworked it over a period of a few weeks before submitting a finalized version.

“I just happened to be with my son and his friend,” Boast said. “We were near recording equipment, so we spent the weekend working on it. That happened shortly after the competition was announced, and we liked what came out of it.”

An Alma Mater serves as the anthem or official song of a school or university. They tend to be serious; however, Boast wanted the new piece to have a more modern musical score – one that can be played on a myriad of instruments.

“We were going for more happy and positive rather than formal,” stated Boast.

Members of the College community voted among two finalists’ submissions last spring through the College’s governance structure. Students, faculty, staff, and administration unanimously voted for Boast’s submission to be adopted as the new Alma Mater.

Asked about how he felt after winning the contest, Boast was not only ecstatic that their hard work had paid off, but he was very happy that the song was adopted as a group rather than simply forced on others.

“Hopefully, it can become a part of the tradition at Penn Highlands. We are very happy that the students, faculty, and staff all voted for it.”

The new Alma Mater has already been officially approved by the College’s Board of Trustees. Boast will be recognized at the College’s 2019 Convocation Ceremony, as the College celebrates their 25th anniversary year.